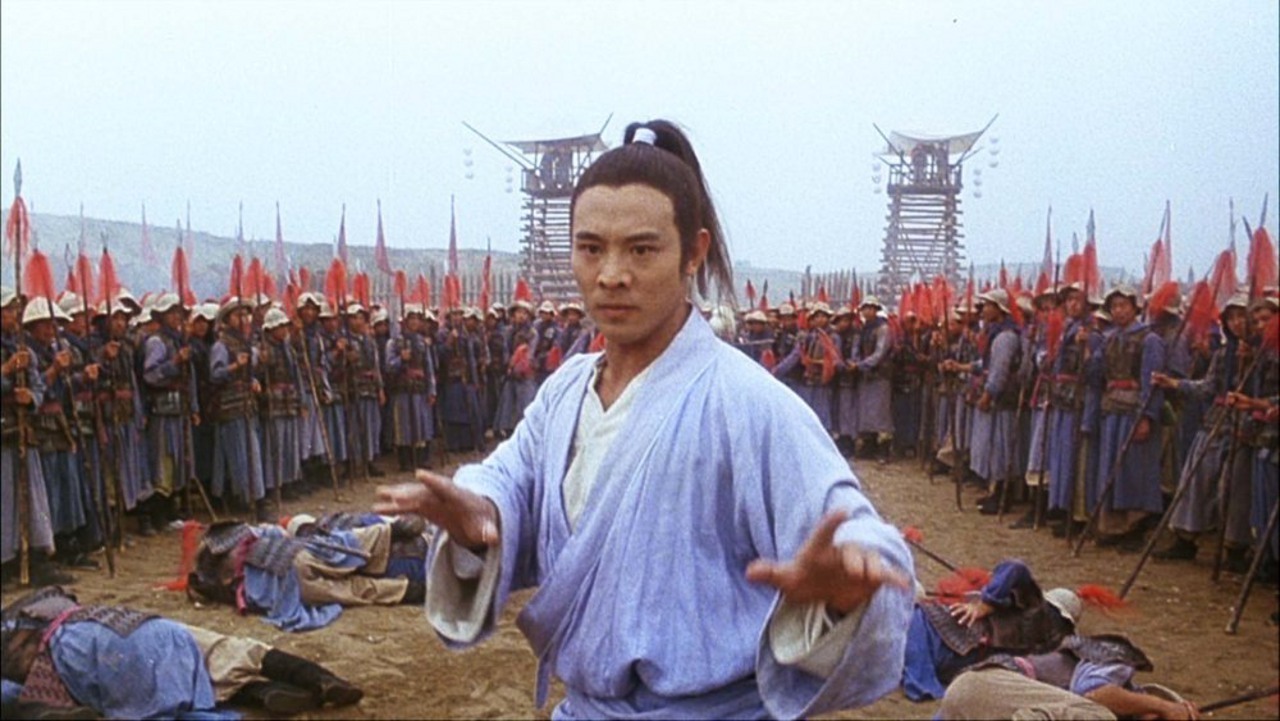 Jet Li is generally regarded as having a more serious cinematic persona in comparison to the other major Hong Kong martial arts movie star of his generation, Jackie Chan – but that’s not entirely accurate.

It’s true that Li never had the comedic ability that made Chan so enduring, but some of his best work is silly and he was able to bring off the quasi-childlike tone of such films just fine. The most entertaining one is “The Kung Fu Cult Master,” a kind of wuxia cartoon with absurdist humor and impressive action scenes.

Jet Li wore his Kato-like outfit for one of the best superhero movies ever made before comic book stories became mainstream Western entertainment (not just cinema anymore, but everywhere in culture).

It is one of the best of its genre because it excels at what it is supposed to do: the action. It consists almost exclusively of set pieces with, aside from the occasional shootout, just fight scenes which, as you might expect, feature some of the most violent and visually impressive wire-work ever seen on screen (courtesy of Yuen Woo-ping). Every Marvel feature would be a pleasure to watch if it operated at this level of kinetic craft and action.

Known for his elaborations on on-screen martial arts and his ability to market his own label as a brand, Bruce Lee made a name for himself with his namesake. Due to their connection to his iconic figure, it takes a lot of courage and conviction to dare remake any of his classics.

Gordon Chan and Jet Li not only remade a Bruce Lee film, but they made it better. Despite Lee’s charisma and a few graceful fight scenes, the original is plagued by tedious plot contrivances – a problem insurmountable for a kung fu flick.

It’s in the fights that “Fist of Legend” shines the most (tighter pacing, better characterization, Chan’s eye for color palette). Yuen Woo-ping’s choreography is wonderful as always, but in this film, it’s interesting because it is a departure from wirework; the kung fu is grounded, realistic, and raw – something Lee, a fantastic performer, realizes beautifully.

“Fearless” was widely hailed at the time as Jet Li’s final martial arts story, which didn’t turn out to be actually the case since he went on to star in a few more kung fu films in subsequent years. Yet in a broader sense, this film does seem to be a fitting end to the career of one of Hong Kong’s most distinguished action stars.

One of Li’s characters, Huo Yuanjia, goes through a series of meta-evolutions before taking his final bow, symbolically mirroring the actor’s position within the film. Ronny Yu’s storytelling has a poignant elegiac flavor that simultaneously laments the passing of an era and pays tribute to the performer who plays the title character’s kung fu prowess.

As for Yuen Woo-ping’s choreography, it’s pointless to praise it at this point (his brilliance is self-evident) but it’s also essential, given that “Fearless” is so strongly based on his fight scenes.

The Legend of the Swordsman AKA Swordsman 2 (1992)

In reality, “The Legend of the Swordsman” is the first collaboration between Jet Li and Tsui Hark who is credited here as a producer, but whose distinctive style defines this film entirely.

The plot is completely incomprehensible, which is a Tsui penchant. Hark emphasizes abstract style over a traditional narrative, which can be difficult to sell to a lesser filmmaker, but he is so skilled as a stylist that it works here. As a result, you won’t have the chance to question anything going on, since you’ll be too busy taking in the breathtaking images, which come at such a rapid pace that it almost causes whiplash.

The most memorable aspect of “The Legend of the Swordsman” (and also clearly influenced by Tsui Hark) is the unusually (for a Wuxia) high level of violence. It remains one of the most visceral and visually intriguing wuxia films ever made – almost 30 years after it was released.

Besides being one of the world’s greatest fight choreographers, Yuen Woo-ping also directs martial arts films, but although he worked with Li many times on choreography, as a director they only worked together once.

This is a shame, because “Tai Chi Master,” their sole joint effort, is just terrific and makes one wonder what the two would have accomplished together as filmmaker and star.

Even by his standards, Yuen’s choreography here is so elaborate and staged with such raw aplomb that it makes his work in American movies look tame in comparison. Surely only in Hong Kong kung fu films could you witness Michelle Yeoh using the pieces of a broken table as stilts as she kicked her enemies. There are certain things you can only find in this industry.