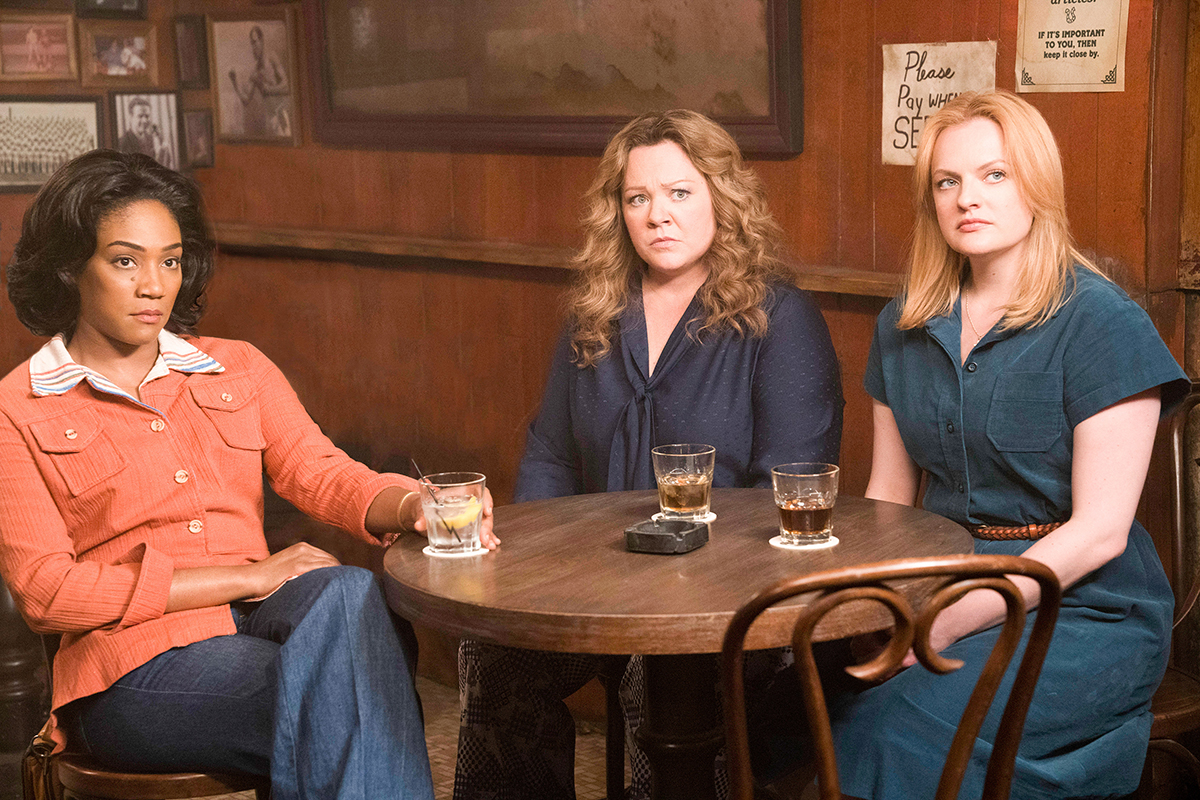 The American gangster movie genre is popular for its morally challenging convections. With its giddy whiplash through the attraction-repulsion cycle, each gangster movie gets viewers hopped up on power fantasies, adrenaline, and the rush of taboo fantasy. The Kitchen follows the same recipe that audiences have seen countless times.

Adapted from the DC Vertigo graphic novel by Ollie Masters and Ming Doyle, the premise gives a female viewpoint to the popular, machismo infused gangster flick. However, don’t expect Goodfellas from these girls, as most of the vacuous plot is utterly predictable. It is refreshing to see women as the crime bosses, but a gender swap alone cannot make a good movie.

Produced by New Line Cinema and DC Films, and distributed by Warner Bros, the movie is set in the late seventies when the Irish mob ran the unions, protection, and loansharking rackets of New York City’s Hell’s Kitchen. After three local heavies: Jimmy (Brian d’Arcy James), Rob (Jeremy Walsh) and Kevin (James Badge Dale) are arrested for their strong-arm tactics, their wives sink into poverty and desperation. Though begged for a raise in their scant allowance they are ridiculed and rebuked. One of them even gets racially subjugated because she is the only black woman amongst the Irish. Thus, the women decide to take over their husbands’ business and enlist a cold-blooded killer (Domhnall Gleeson) to back them up.

The movie marks the directorial debut of screenwriter Andrea Berloff (Straight Outta Compton). Telling the femme-centric story of women taking the reins, the movie is constructed around three strong actresses-Melissa McCarthy, Tiffany Haddish and Elisabeth Moss. However, it fails when it comes to characters and settings, as they are so overblown that they look more like caricatures. Adding that to the generic gangster plot, The Kitchen feels more trudged than visceral.

Most crime dramas pay more attention to detailed character exposition. This nuance is lost somewhere in the heavy-handed and obvious plot of the movie. But, the overall empowerment theme should be celebrated, though it sometimes becomes contrived with its megaphone delivery.

In short, if you are a fan of hard-R rated movies, then The Kitchen might be your cup of tea. There is plenty of onscreen violence, swearing, and adult themes. With extremely graphical headshots and chopped up bodies, the movie works better as a pulp action film with girl power.