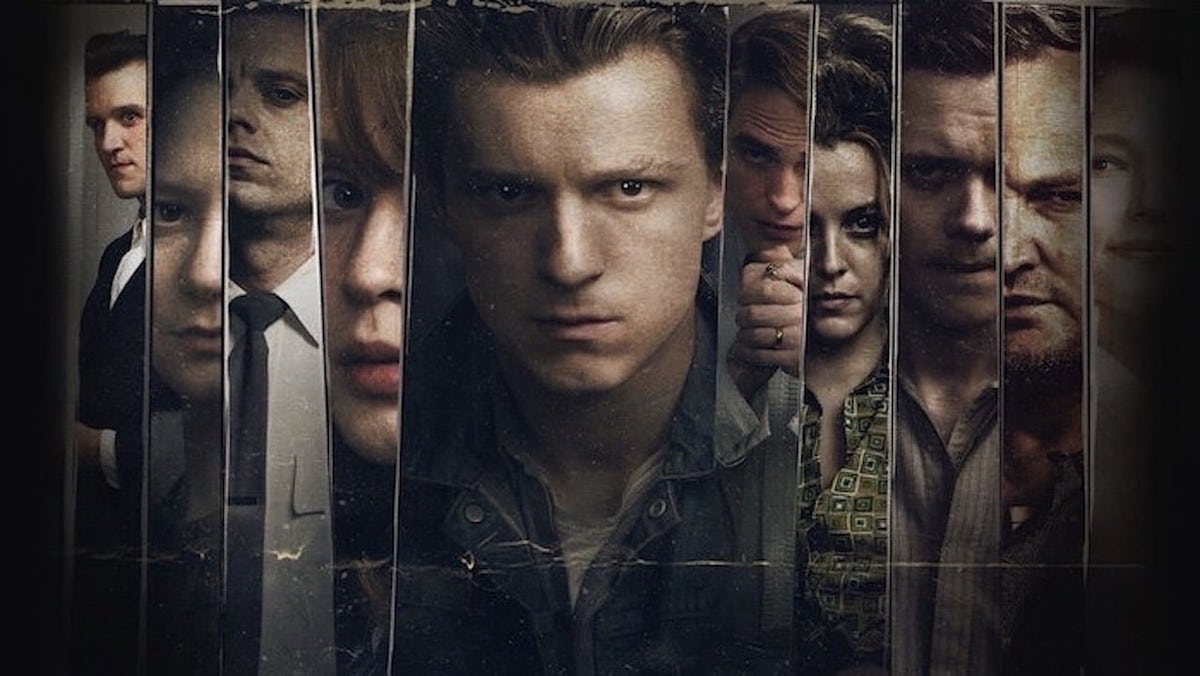 Netflix’s newest entry into the thrillers catalog is powerful, yet the disturbing blend of faith, crime, and violence. Based on the acclaimed novel of the same name by Donald Ray Pollock, The Devil All the Time unfolds a sprawling story that is set across generations, families, and two wars. The movie lasts for more than 2 hours and there is a large ensemble of characters that you will eventually lose track off. With such an elaborate set of events and characters, it would have been wiser for Netflix to run it as a mini-series than a movie.

The slow-burning, dark thriller opens with Willard Russell’s (Bill Skarsgard) return back to his home after the traumatic War in the Pacific. Even though he tries to make a family, it becomes a failure. His wife Charlotte (Haley Bennett) dies after falling to illness and Russell eventually ends his life by committing suicide. This leaves his son Arvin (Tom Holland) to live the life of an orphan in a godless land. He is surrounded by murders, serial killers, and more awful men who believe that God is making them do it. It was in his teenage years that an opportunistic and sleazy preacher (Robert Pattinson) arrives, setting in motion some of the most gruesome tragedies of Alvin’s life.

God, war, and the innately violent nature of humans creates the main core of the story. Even though the movie uses the novel’s texture to tell this story, it fails to capture its depths. There are many instances where it feels like the characters can engage with each other only through violence. This pretext of violence resists the depth that the movie desperately needs. Instead of focusing on how violence has impacted multiple generations of Americans, it felt more like a voyeuristic exercise on heinous crimes.

The performances by actors are highly commendable. Tom Holland miles away from his Marvel appearance and proves that range is much greater than anyone would have expected. Robert Pattinson looks comfortable in his portrayal of the corrupt preacher.

Even though it fails to include noteworthy black or brown faces, like many other midwestern period pieces before it, The Devil All the Time stands strong for the brutal portrayal of violence and religion in the heart of the country. Most of the movie may turn out to be vicious and dark for many viewers, However, its truthfulness to the darkest aspects of human behavior and the brilliant, engaging performances from the actors makes this movie rewarding.