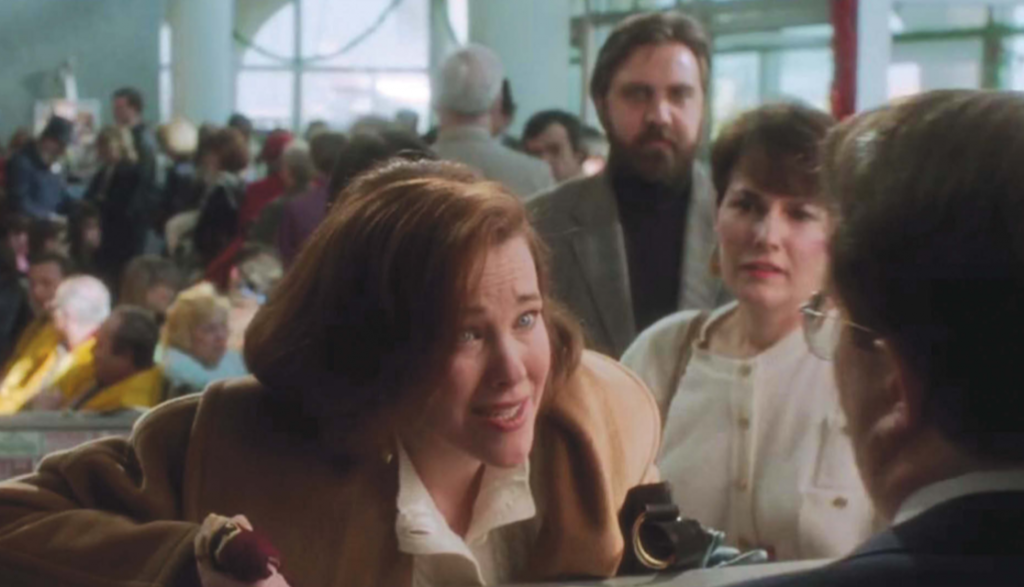 Elvis Presley is Alive and Featured in Home Alone

A fan theory claims that not only was Elvis Presley alive when Home Alone released but that he also made an appearance in the film. This is not just insane. One might even call this theory “Bonkers”. Let us examine the evidence that indicates this is true.

Home Alone released in 1990. Elvis Presley died almost 13 years prior to its release. So even considering this idea for a moment seems ridiculous. But here goes!

When Kate McCallister realizes that her son has been left behind, she gets into a squabble at the Scantron airport staff trying to convince them to help her get to Chicago. In the scene, while she argues with the attendant, there is a man who looks so much like Elvis Presley.

The man is spotted rocking a modest suit, just like any other extra from a scene in a Hollywood film. No bejeweled catsuit, no sideburns, basically nothing that is typical Elvis (because for all we know, he is not).

Careful scrutiny of his actions and head movements are done in a video below. Watch the video and decide for yourself as we have more evidence to cover.

The theory also emphasizes on the fact that Kevin’s convincingly inspiring bathroom performance on “White Christmas” is a point to be noted. It was the same song that Elvis made a cover for.

And if all of this is not reason enough to consider this theory, Home Alone director Chris Columbus mentioning Presley in one of his comments, totally is.

“They are convinced, these people, that this is Elvis Presley,” Columbus says. “That he’s faked his death, and because he still loves show business, he’s an extra in Home Alone.”

“Look at this guy,” he talks of the bearded man in the scenes “He’s not Elvis Presley!” (Sure he’s not, Chris…)

And the most notable and rather mysterious evidence is the anagram that a fan deduced to support this theory. It is strange that when you rearrange the letters of Kevin McCallister, you find a message “I, Mr. Elvis, act”. This is both spooky and hilarious at the same time. On one hand it does sound like a message from a ghost. But as far as logical reasoning goes, this does not even qualify as a perfect anagram. But even then, believers of the theory, consider this final piece of evidence as an important one.

But people, at least since the sarcastic tone in the commentary of the Director! That’s all we got for now! Home Alone is clearly getting more and more sinister with wild theories popping up time and again. Check out other Home Alone theories covered by Spotflik. 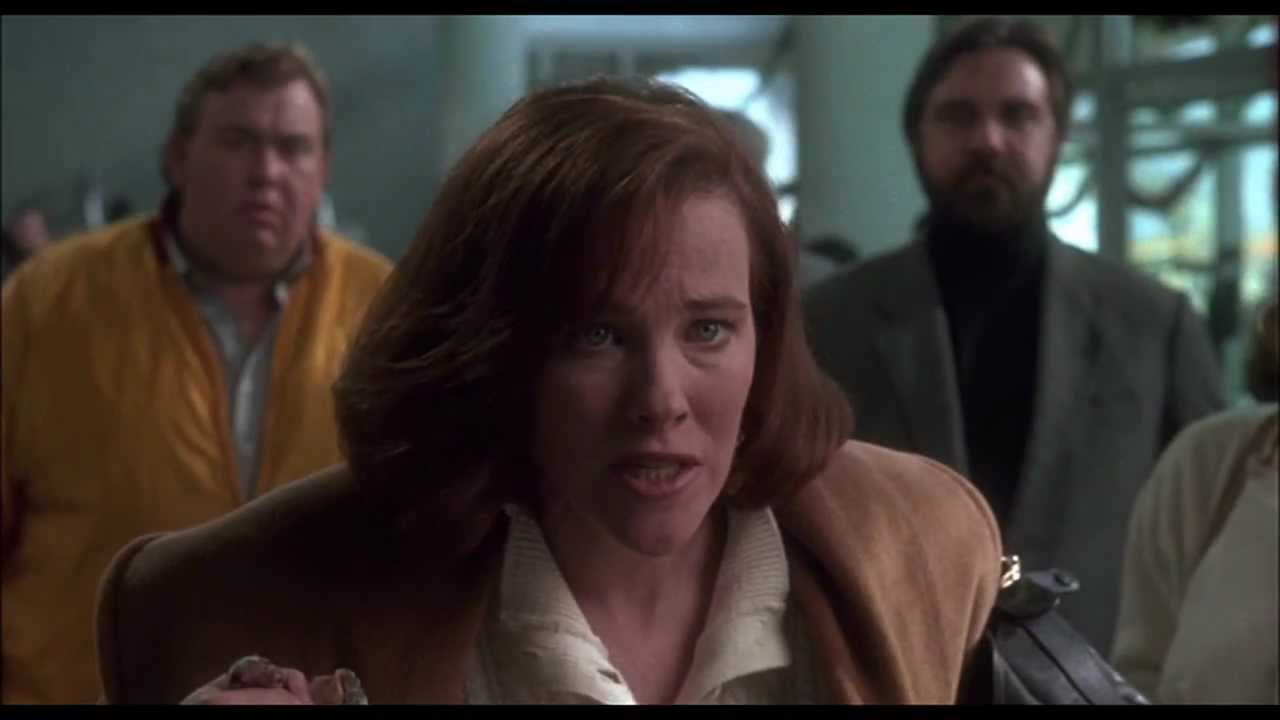 It’s been more than 29 years since the release of Home Alone. The iconic holiday classic has had generations of audiences head over heels for its goofy prankster of a child protagonist. Kevin Macallister is left behind in his own house while his family goes for a Christmas vacation. His goofy antics and instant ideas get him through even the direst situations. Thanks to his wits and ability to lay elaborate traps with regular household items, he is able to protect his house from a robbery and give us two full hours of entertainment.

The classic garnered enough attention to have several sects of fans and movie buffs coming up with insane theories around its simple plot. One of the craziest theories was sparked by a Reddit user who believes, Kevin’s mother sold his soul to the devil to make sure her son was safe. You’d be thinking, how come a comical holiday classic about aimed at young children possibly have such a dark twist. And how come you did not notice it all these years?

Its because this is just a theory spawned from trivia and possibly does not hold much weight with the kind of evidence. As a fan of delightful holiday movies, you are probably disgusted by the idea. This may have even ruined your favorite childhood film. But the lovers of dark comedies will possibly find this theory rather intriguing.

So who is the devil we are talking about here?

The Polka King of Midwest who greets Kevin’s mother at the airport- Gus Polinski! Apparently being in a Polka band is just a cover he uses to have his way around with innocent and troubled souls.

When Kevin’s mother, Kate realizes her son has been left behind, she freaks out at the airline staff and causes quite a scene that attracts onlookers.

What she precisely tells the airline rep is “If I have to sell my soul to the devil himself, I am going to get home to my son.” We must say the foreshadowing is commendable.

Amongst these onlookers stands Gus Polinski, who notices her little outburst. He has found the perfect victim.  Before the airport staff can provide any advice on dealing with her ordeal, Gus walks up to her and offers to help her. The man in the yellow jacket is the one we are talking about.

The second indication comes from the location of the airport where Kate is stranded. The Scranton airport Is located at a crossroads. According to the Reddit user Drewgarr, the crossroads is a myth connected to the world of demons. This is the place where you can make a deal with the devil.  The devil makes an appearance and grants the wish in exchange for something (in this case, the soul). So in this movie Kate has agreed to sell her soul to the devil if he can get her to Kevin.

In exchange for her soul, Gus offers her ride to Chicago. He introduces Kate to one of his friends who rented a van. Kate agrees to the terms and seals the deal with the devil, thus accepting the ride. She may have been irresponsible in keeping a watch on her child but this makes up for every mistake she made as a mother. Could you have asked for a bigger sacrifice?

But how do we know for sure that Gus is a Devil?

Gus plays a woodwind instrument. And guess what the Devil’s instrument of choice is? Bingo!

In the words of the Reddit user himself – “One last piece of evidence that I have found is Gus choice of instrument. Sure it’s not as obvious as a fiddle, instead, it’s a woodwind instrument. There are some references in the bible that one of the instruments are created and favored by the devil (my understanding at least),”

This does seem a little out there but the evidence he has provided is rather remarkable. It only goes on to prove how vigilantly the person has followed each bit of the film and then connected the dots. Sure the makers may have never had this idea in mind that the elements they have put in place have a rather hellish essence to itself. But it is rather fascinating to watch the film with a different outlook. Dark too! 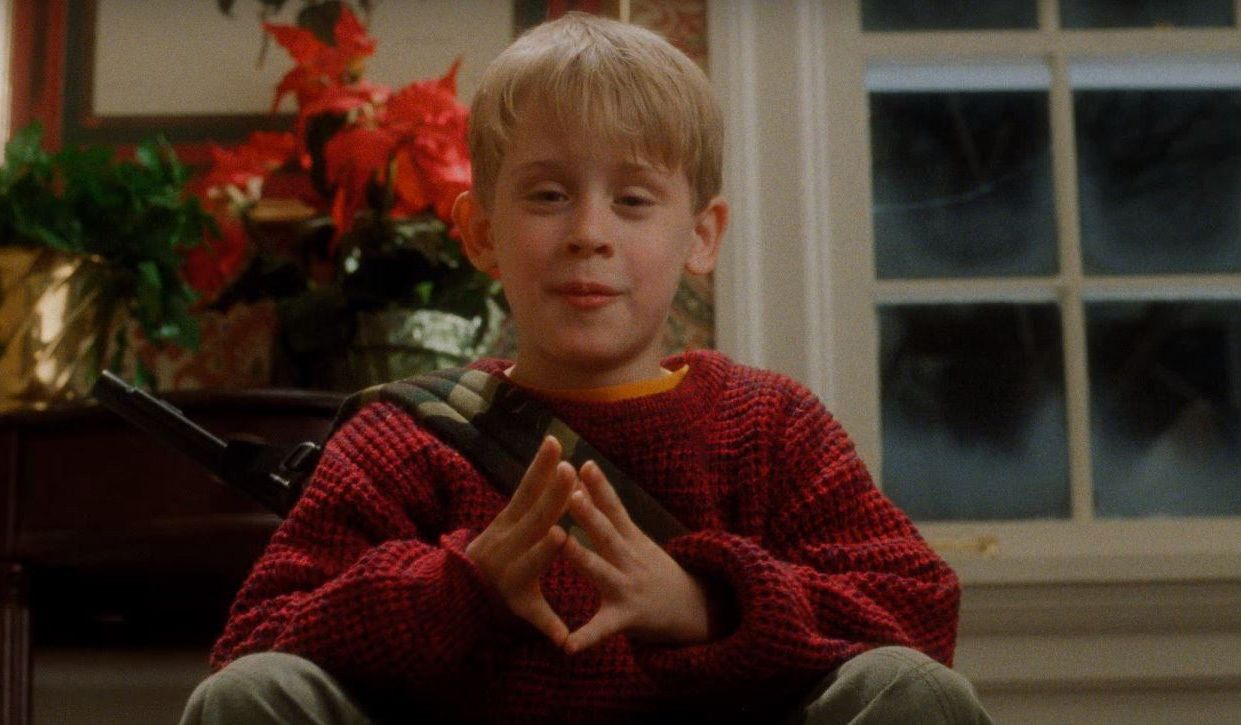 There is this crazy theory doing rounds about Kevin McCallister being the Jigsaw. Home Alone films by 20th Century Fox were a major blockbuster of the 90s. In the film, Kevin gets left behind while his family goes on a vacation. Two burglars take note of the fact and try to break into the house. Kevin gives them a tour of hell with his cunning defense art. But this creative skill later evolves into a murderous instinct as per a few.

Jigsaw, on the other hand, is a crooked killer who resorts to killing people as a distraction from his imminent death. Jigsaw’s name is John Kramer. He has a peculiar way of murdering his victims. The captive must play the games they are surrounded with to stay alive. He kills them if they lose.

So where is the comparison here? Let us break it down for you

Kevin does not show any signs of abnormality as a child. Granted he only harms the bandits in defense. But the fact that he enjoys watching them suffer cannot be neglected. Jigsaw’s motive is to generate newfound respect for life in the minds of his victims but he too enjoys torturing them. Would it be totally nuts to assume that Kevin lost his grip on sanity when he heard the news of his illness and brought back the sadist mentality in a more violent way?

Both Kevin and Jigsaw use similar crafts to hurt their victims. Kevin’s speciality is building elaborate traps while Jigsaw makes up complicated games. Some of Jigsaw’s games have an uncanny resemblance to Kevin’s work of art.

Not to mention the blue eyes and blonde hair and oh, the mysteriously similar jawline they share. If we assume Kevin moved to the east coast after experiencing the events of home alone and grew up there, it all adds up. He possibly assumed a new identity of John Kramer and the rest is history.

The release timing of the two movies may not favour this theory since Kevin is just a kid in home alone films and he could only grow up to be a teenager by the time saw released in theatres. But Jigsaw is a fully grown man.  Nevertheless, James Wan, the maker of Saw fully supports this theory. That could mean something.

Only if the math of the release dates could add up, we would have every possible explanation to believe that Kevin did grow up into Jigsaw.