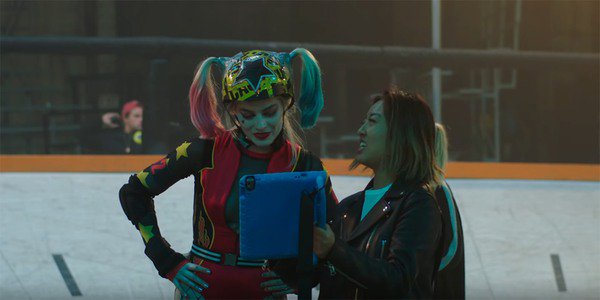 DC’s Birds of Prey (And the Fantabulous Emancipation of One Harley Quinn) is tuning up to be a flick worth waiting for. Though a full trailer for the next year’s movie is yet to arrive, the filmmakers have spared no time in teasing us with sneak-peaks here and there. From a short Comic-con footage to a theater-only teaser released alongside IT Chapter Two, the makers are not shy to show off their works whenever they can. The latest addition to this comes from a video from WarnerMedia’s (the parent company of Warner Bros. and DC) YouTube page.

The new footage gives us a glimpse of Margot Robbie’s Harley Quinn at a roller derby.

You can watch the full video below:

It may be the last place you will expect a new look for the movie, but we are so awestruck with Margot Robbie’s Harley Quinn that we’ll take whatever we can get. The short portion shows Birds of Prey director Cathy Yan working with actress Margot Robbie in full roller derby costume.

With her pigtails going through her helmet and a great roller derby outfit, the scene will surely have some of the fun and heart of Whip It combined with the ridiculousness of Rollerball.

Lately, Actress Mary Elizabeth Winstead remarked that the film will be really weird when compared with other comic book movies. The first poster released supports this description to the most as well.

With the tone of the movie already made familiar with the audiences, Birds of Prey is expected to have fair reception when it arrives in theaters on February 7.