Underwhelming sequels are not exactly uncommon. But when a sequel follows the route taken by two of the best sequels in recent years, Star Wars: The Force Awakens and Creed, that is, taking the plot structure of the original and reusing it for a new generation, it is disappointing to see it feel so rote and unimaginative. It’s great to once again enjoy the charismatic screen presence of Mary Poppins herself, and Emily Blunt in that role is practically perfect in every way. But the movie also includes a father (Ben Whishaw) who sometimes gets unreasonable cross at his kids and must learn to find the child in himself again. It includes a mother-like figure (Emily Mortimer) who is fighting for an important social cause but is sometimes laughed at for it. It has a lamplighter (Lin-Manuel Miranda), who was not only an apprentice of the chimney sweep (among other jobs) from the original, but plays exactly the same part here. And finally, it has the bank. Bank troubles fuel the initial conflict, a banker (Colin Firth) is the antagonist and a showdown at the bank acts as the climax. Just like the first one. Even the one random cameo in between (Meryl Streep) that has no bearing on the plot feels oddly reminiscent of the scene from the original where they all fly to the ceiling.

Those are just the major instances that immediately stand out. I could take the time to detail all the little jokes here are rehashed from the first without any comment on them or any significant addition to them, but by now you get the idea. The premise is simple: 25 years after the events of the first one, the Banks children have now grown up, Jane Banks a labour activist and Michael Banks a widower artist with a job at the bank. As the movie begins, Michael learns that he must pay off a loan in a few days in order to keep his house. He, Jane and his three kids must figure out a way to find the large sum required within that time, and that’s when Mary Poppins comes back into their lives to remind them what’s important, and in the process, teach them some very British manners. 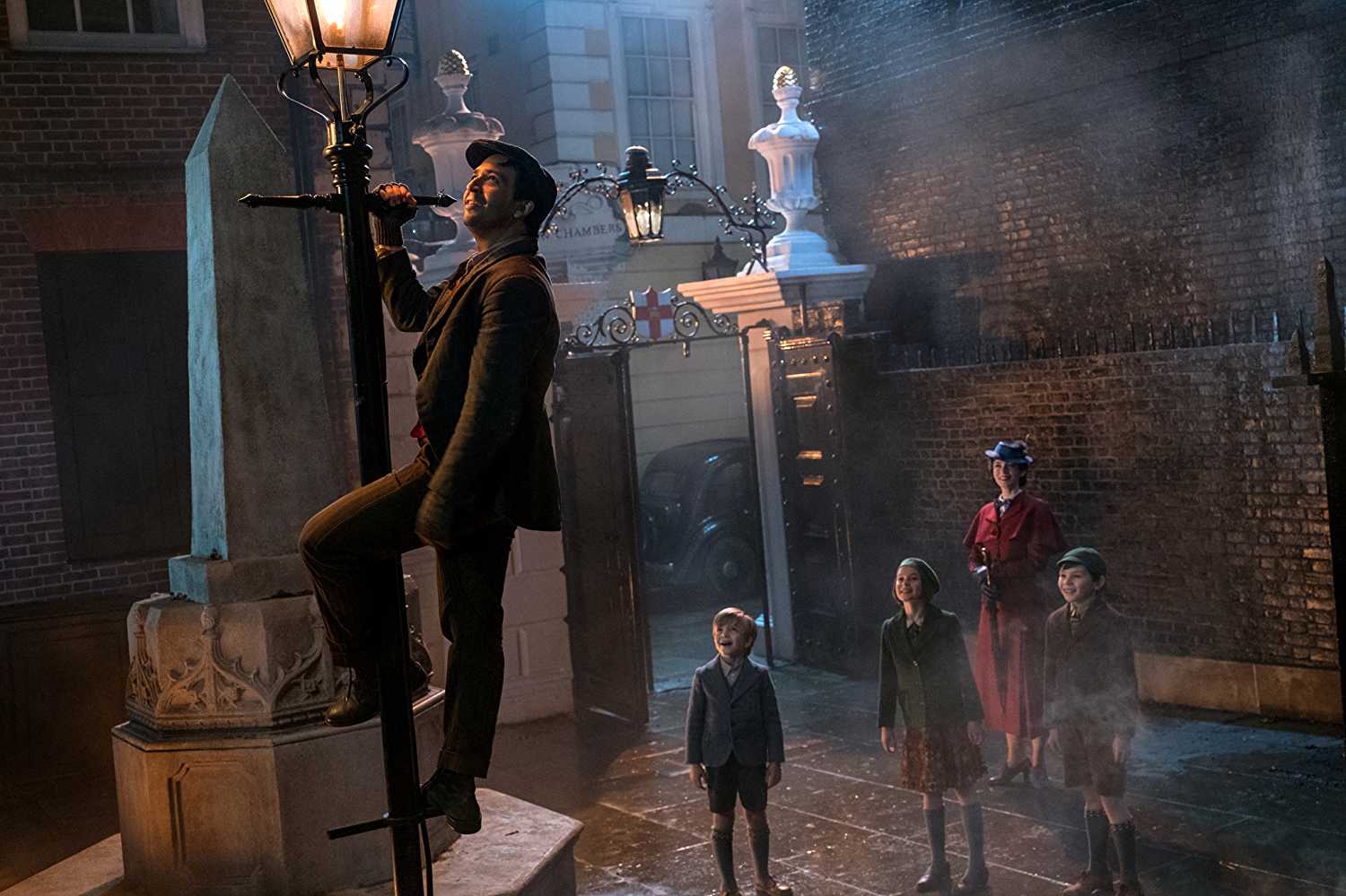 The best children’s stories entertain or educate children, and simultaneously offer adults something more to chew on. Mary Poppins Returns isn’t quite complex enough for that, and the best adults could really take away from it is a pleasant sense of nostalgia for the original, but that’s not to say it’s not a great entertainer for kids. The technical production is fabulous, with stunning visual effects that not only make the Mary Poppins magic fit seamlessly with the live action world around her, but manage to make the live action characters not look odd when they find themselves in a 2D animated world. Moreover, the children are immediately lovable, and since their mother’s death has left them responsible and wise beyond their years, they also act as great role models for the little ones watching.