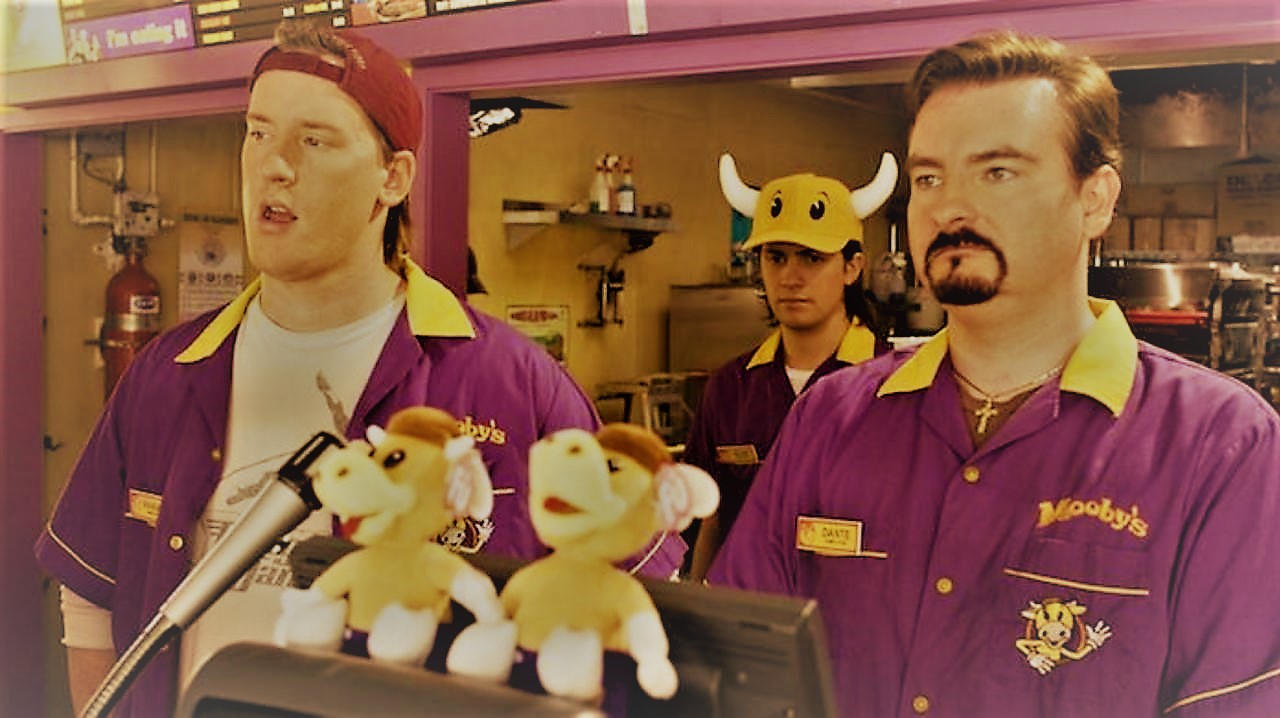 Kevin Smith’s Clerks III Is Almost His Own Biography

A few days earlier Kevin Smith announced on his Instagram page that his 1994 indie cult hit Clerks is getting a threequel.

3 CLERKS! Thanks to the good folks at @zscentertainment and @leeloomultiprops, I got to see Randal! #JeffAnderson, @jaymewes, and I spent Saturday signing stuff and catching up, seeing so much movie merch that’s been made over the last 25 years (hit the Leloo site for sweet signed skateboards)! But even better than that? We talked about making a movie together. It’ll be a movie that concludes a saga. It’ll be a movie about how you’re never too old to completely change your life. It’ll be a movie about how a decades-spanning friendship finally confronts the future. It’ll be a movie that brings us back to the beginning – a return to the cradle of civilization in the great state of #newjersey. It’ll be a movie that stars Jeff and @briancohalloran, with me and Jay in supporting roles. And it’ll be a movie called CLERKS III! To be great is to go on. To go on is to go far. To go far is to return. And we’re all gonna return to the scene of the crime! This won’t be the old script we almost made a few years back: this is a completely new screenplay that I just started writing last night! And so far, it’s like a dream come true! After mending fences with @benaffleck earlier this year, I was hoping for a chance to do the same with Jeff – so huge thanks to Leeloo Multiprops for getting us all in the same room. But the biggest thanks ever go to Jeff, for being receptive to the idea at all. This means I’m gonna get to play with my two favorite inaction figures again: Dante & Randal! Two weeks from the debut of @jayandsilentbob Reboot (on @fathomevents screens 10/15 & 10/17, link in my bio), I’m ecstatic to announce our imminent return to Quick Stop! So I assure you: we’re open! #KevinSmith #clerks3 #jaymewes #jayandsilentbob #danteandrandal #quickstop #leeloomultiprops #indiefilm #clerks

Although the idea through which the plot seeded is even more interesting.

Kevin Smith, in his interview with ‘The Wrap’ confirmed that the plot of Clerks III is inspired by his own heart attack. For those not in the know, Smith suffered a fatal Heart attack last February.

In his interview he explained the plot for Clerks III:

“Randal has a heart attack, decides that he came so close to death, and his life has meant nothing, there’s nobody to memorialize him, he has no family or anything like that. And in the recovery, while under fentanyl, he comes to the conclusion at mid-life, having almost died, having worked in a movie store his whole life and watched other people’s movies, he tells Dante, I think we need to make a movie. So Dante and Randal make Clerks. That’s the story of Clerks 3.”

Brian O’Halloran and Jeff Anderson will reprise their roles of Dante and Randal respectively with Jason Mewes and Kevin Smith himself as supporting characters.

The third installment of Clerks was being teased for quite some time now. Smith even read an iteration of the script publicly along with his friends. He had completed the script for the threequel a few years back. But owing to Jeff Anderson (one of the headliners of the franchise) bailing out of the project, the film had to be canceled in 2017.

Smith and Anderson recently reconciled the differences as the director confirmed in an Instagram post. It looks like the differences were likely about the script since Smith also mentioned that the current script for Clerks III has an entirely new screenplay from the one which was written earlier.

The director seems to be on a “making amends” spree lately. He also made up with Ben Affleck and got him to do a cameo in Jay and Silent Bob Reboot which is set to open in theatres next week. We all know, most Kevin Smith films exist in a shared universe. Jay and Silent Bob are characters from Clerks 2 who went on to have their independent movie in 2001.  And it was not just Ben Affleck but many folks from the View Askewniverse who made their way into the follow-up feature of Jay and Silent Bob Strike Back.

Smith takes pride in the fact that he enjoys living in the past. His obsession with remakes and reboots and most importantly callbacks of characters from his other movies is proof enough. Where most his films are more humor over substance, things seem to have changed with Jay and Silent Bob Reboot which actually has more to it than just raunchy humor and celebrity cameos. The plot follows Jay discovering the existence of his love child and experiencing unusual fatherly instincts.

And learning of plot of Clerks III we can hope for the trend to continue.