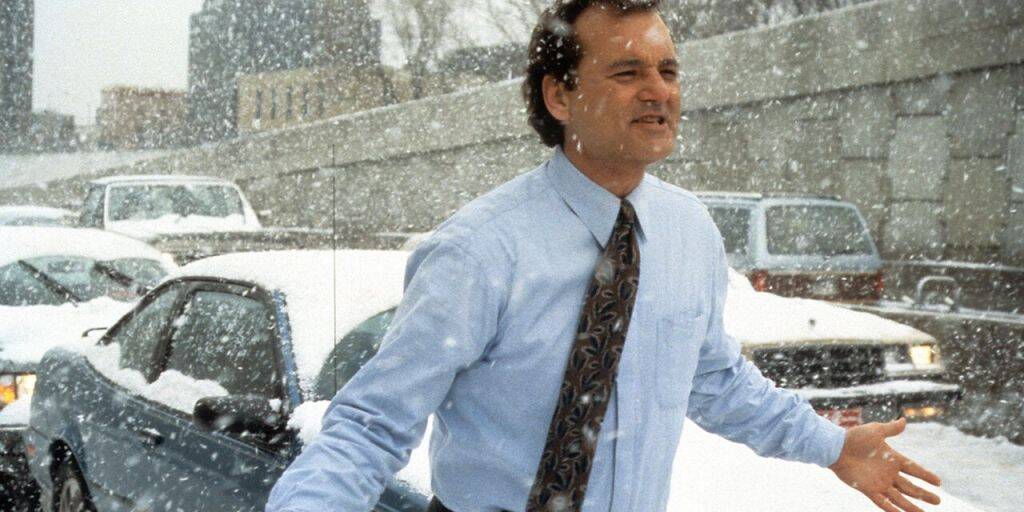 In Groundhog Day Bill Murray Is Buddha and Punxsutawney Is Purgatory

Ramis Harold’s Groundhog Day comes across as a thought-provoking film that had us asking some very important questions about life. The film’s protagonist, Phil wakes up to the same old day precisely 38 times on screen, although there has been some ambiguity surrounding the actual number of days he lived the recurring reality of February 2nd. Phil is a TV weatherman and visits the town of Punxsutawney for officially covering the annual Groundhog Day celebration. On the eve of the ceremony he is already in town and hits a local B&B only to be woken up in the morning to the sound of clock radio playing Cher’s I’ve Got You, Babe. He isn’t particularly enthusiastic about his job and does a sloppy on-camera bit just for the sake of it. Now that he has completed the task, he tries to leave the town but a snowstorm strikes the region and he has to stay the night. He crashes into the same B&B and wakes up the next day with an awfully precise Déjà vu. Except, it’ not a Déjà vu! The day of February 2nd keeps repeating itself until Phil accepts and mends the flaws in his current outlook. Each repetition brings along new realizations and experiences that he tends to overlook in the earlier attempts thus making him appreciate each moment and make the most out of it.

The film was critically acclaimed by critics and academics across the board. But one of it’s most endearing effect was the way it was perceived by philosophers and followers of various faiths.

The film was scrutinized in a theological light by various ethical gurus and thinkers. At the surface it might seem like a comical journey of a supposedly tragic hero. Although at its core, “Ground Hog Day” is about finding the true purpose of one’s existence.

One of the most prominent sects to pick up on the film’s philosophy was Buddhism. The Buddhists found the theme rebirth particularly conversant. Director Harold Ramis himself spoke about people who felt the whole idea a moving experience which included his mother-in-law who was a Zen Buddhist.

There were many others who shared similar views. Stephen Simon, Spiritual Cinema Circle co-founder called the movie “a wonderful human comedy about being given the rare opportunity to live several lifetimes all on the same day. Of course, that’s not how the film was marketed but, for our purposes, I believe that concept is at the soul of the story” in his essay titled, “Groundhog Day The Movie, Buddhism and Me,”.

Dr. Angela Zito, co-director of  NYU’s Center for Religion and Media believed that the story symbolized the idea of  Samsara or rebirth. In her interview with The New York Times, she said  “In Mahayana [Buddhism], nobody ever imagines they are going to escape samsara until everybody else does. That is why you have bodhisattvas, who reach the brink of nirvana, and stop and come back and save the rest of us. Bill Murray is the bodhisattva. He is not going to abandon the world. On the contrary, he is released back into the world to save it.”

And that is how Bill Murrays’s character in the film went to gain a hypothesis that represents Buddha. That’s not it. There were speculations around the town in which the film was set. Writer Jim Cissell caused an online stir when he wrote an article about how the town of Punxsutawney is probably a purgatory. For those of you who do not know, purgatory is a place between heaven and hell as specified in the Catholic Church doctrine. Cissell highlighted various aspects of the town that pointed out its similarities with a purgatory. An elaborate version of this theory goes on to tell us that Phil Connors is going through his own brand of purification before he meets his maker. And the changes he undergoes here will have a direct impact on his fate in the afterlife.