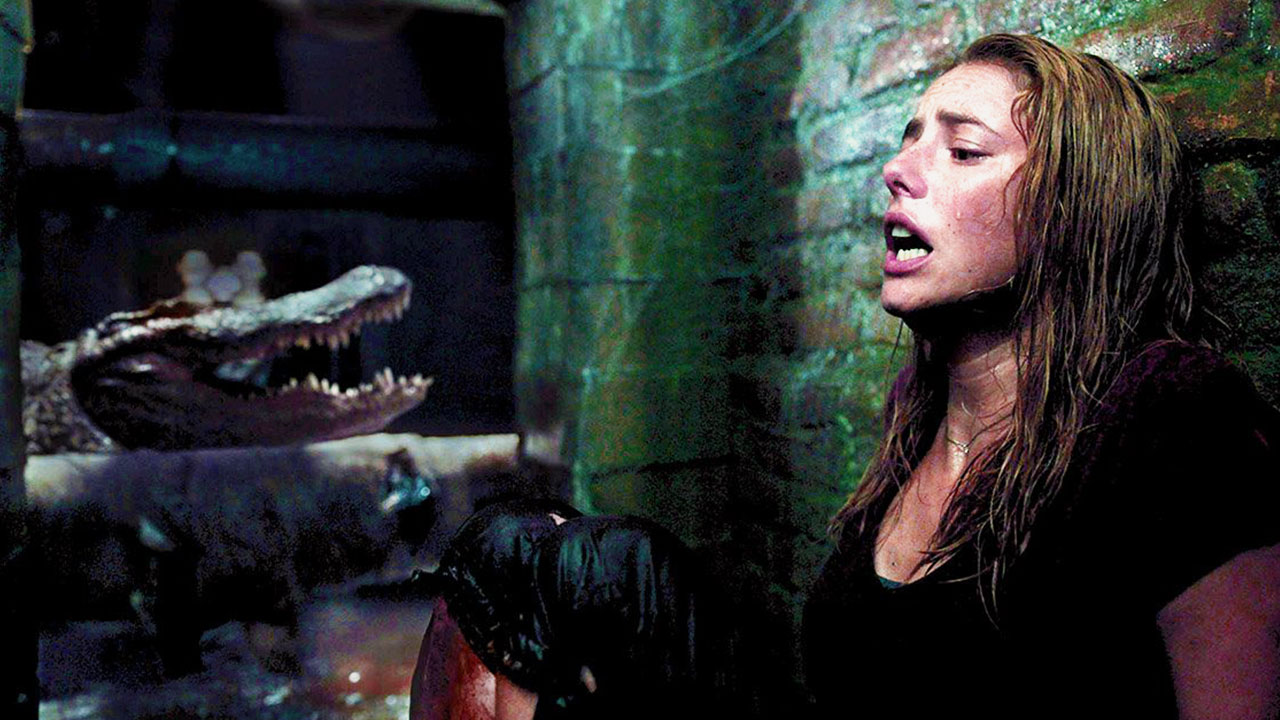 The usual tradition of a blockbuster studded summer faded this year. The season saw high budget films gauging the depths of the valleys while a different kind of horror-thriller cruised its way out. Crawl was the latest addition to a roaster of cheap thrill horror cinema. But unlike other indies, this one has a major studio back-up.

Florida is under a category 5 hurricane alert. After numerous failed attempts to reach out to her father, Hayley Keller(University of Florida swimming champion) decides to drive past the impending hazard to check in on him. The way to her childhood home passes through an alligator farm. This is where the audience gets a glimpse into the horror that lay cloaked under a dank natural disaster. She comes home to find her father bruised and trapped in the cellar, a “Crawlspace” of some sort. For the most part of the film, the action builds up in this very region of the house.

As the hurricane reins its fury, the house starts flooding and brings in a swarm of bloodthirsty alligators. The digital fruition of these bone-crushing jaws looks awfully real and earns the film its brownie points. Fun fact, the movie lacks environmental simulation and is primarily shot in a real space calibrated to align with the appearance of a disaster struck home. Hayley (played by Kaya Scodelario) is invariably seen dragging herself through a concoction of black muck even with gruesome gator bites. The script plays up with its highly interactive make-believe sets.

The film flaunts well-schemed attempts of failed rescue only to force in a few humans into the mouths of giants and fuel the uncertainty of survival for the central characters. Director Alexandre Aja creates spikes of panic with dysfunctional items like torches and phones. Kudos to the screenwriters for having appeased the audience with enough scenes of the bloodthirsty giants crunching away human carcasses and scaling the situation of the protagonists!

Even though the plot at large has essentially nothing new to offer, the script lifts off on a fresh note. It is a rather mediocre premise treating the audience with sporadic jolts of thrill. The director succeeds in creating moments of nail-biting tension and sequences which say Don’t Breathe (just to blow Sam Raimi’s trumpet who co-produced the film along with Aja and Craig Flores).

Amidst the mayhem caused by the water and the creatures, the skin-deep script is forced to flex dry emotional substance. The tension fades off for a while as the element of sentimental past kicks in.  The father-daughter duo tries to address issues from the past, which seem like an unruly attempt to mollycoddle a script aimed at inducing raw fear. Although even with a clichéd and redundant emotional angle, the scenes are well gauged to suit the lead actors’ clean and convincing performance.

Given Aja’s record as a successful indie filmmaker, Crawl was not screened at as many press events as it should have been. Where everyone was expecting Disney’s The Lion King remake to be the show stopper, Crawl did surprisingly well for a modest independent horror feature. Though the script draws several parallels with earlier releases in the league, the presentation is acute and effectively served.

All in all, Crawl has progressively perfected the conventional theme of man vs monster with appallingly realistic CGI and gallant performances from the leads.