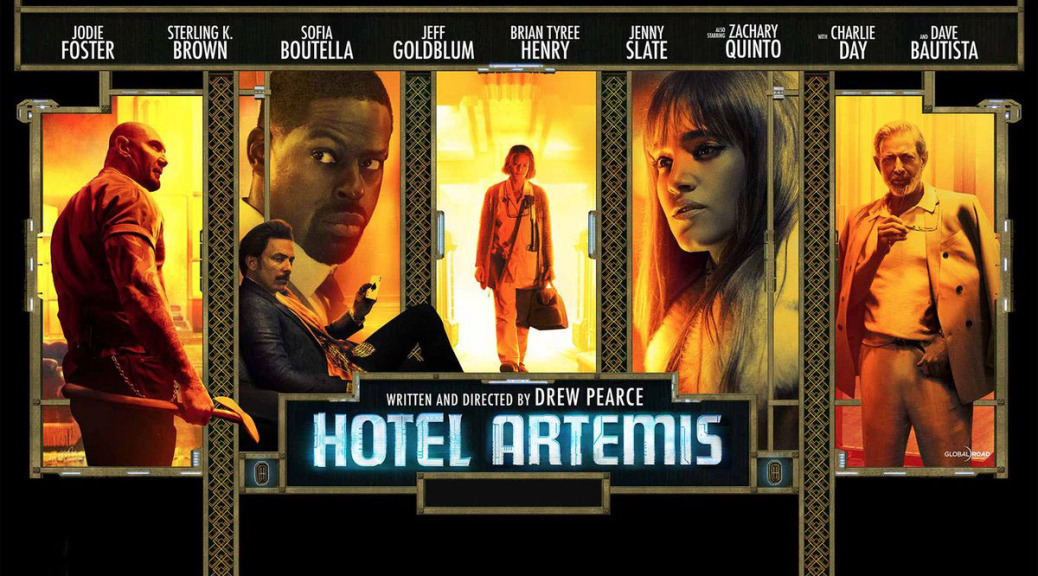 Jodie Foster, Sterling K. Brown, Jeff Goldblum are enough to sell most people on watching anything, but here they’re just three of nine stars crammed into one movie. Cram might seem like an odd choice of word, since having many entertaining personalities bouncing off of each other should be a good thing, but here lies the dichotomy of Drew Pearce’s feature-length directorial debut, Hotel Artemis. On the one hand, the charismatic actors bring a screen presence that glues us to their every conversation, on the other, the movie tries to give each character and subplot its due, not leaving enough time to give depth to any of them.

In a dystopian 2028, Los Angeles residents are engaged in a massive riot due to a water shortage. This setting is a backdrop in the film, and plays no further role thematically. Its only purpose is to make everything outside Hotel Artemis dangerous. The Hotel, run by The Nurse (Jodie Foster), is a safe haven for criminals, complete with state-of-the-art medical technology and strict rules about criminal-on-criminal violence. Remind you of John Wick? Well, if you’ve seen those movies, you’ll have noticed that there, The Hotel Continental is shown to be a true safe haven because, while you can break the rules, the consequences are final and inescapable (except for that cheesy ending to John Wick 2, of course). Rule enforcement at the Hotel Artemis seems to lie on the shoulders of just one man, Everest (Dave Bautista). He’s strong, sure, but he’s still one person, so from the beginning, one never gets that sense of security in that hotel, so that when the violence inevitable goes down, it’s not surprising in the least.

Sterling K. Brown plays Waikiki, a robber with a bit of a conscience, whose idiotic brother Honolulu, played by Brian Tyree Henry (Widows, Spider-Man: Into the Spider-Verse), gets himself shot, which leads Waikiki to bring him to the Artemis for treatment. Honolulu, however, unwittingly brings with him a collection of rare diamonds that many would be willing to kill for, especially the Wolf King, played by Jeff Goldblum. There are more criminals staying at the Artemis, however, and this is only one of the many subplots in the movie, giving it a feeling of being “a day in the life of The Nurse”. This is quite like the recent Coen Brothers movie Hail, Caesar, and if you enjoyed that, I recommend this to you.

As long as the movie tries to just be a crime comedy, it’s quite engaging, but it soon becomes clear that Pearce is really trying to get us emotionally invested in the various relationships these criminals share, which, if it wasn’t already a little challenging because these are criminals, gets really difficult because of how many there are. So while Waikiki was likable enough for me to root for him, I could never care as much about his dynamic with his brother or with fellow lodger Nice (Sofia Boutella) as the film wanted me to. The one dynamic I genuinely found endearing was between The Nurse and Everest. Jodie Foster does a great job playing a woman who’s smart and efficient but just too old for this shit, and Bautista convinces us that he’s someone she can rely on for support. The way Everest cares for her also makes him more than a strong henchman, more than just a physical presence.

One auxiliary point: in its attempt at making us not recoil from this institution for criminals, the movie makes a distinction between classes of criminal, with certain kinds not allowed in there. This includes, terrorists and murderers. Murderers, however, are completely okay. Hollywood, and pop culture in general, has a long history of treating murder as a minor inconvenience, often even a game, but while you can usually compartmentalise those feelings so that they do not affect your experience of every movie with casual murder, Hotel Artemis makes it a little too explicit, and that turned me off on the whole experience.

If, however, that doesn’t bother you, this is what I have to say about the movie: it’s an entertaining watch, and if you’ve seen every other movie in theatres that interests you, this is worth a watch. Just keep your expectations low.