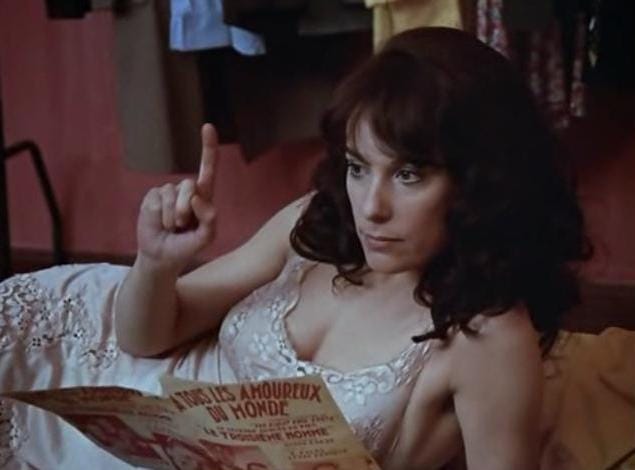 6 French Movies That Every Cinephile Should Watch

The most renowned name in French cinema, along with Jean-Luc Godard, is François Truffaut, who changed the art form with films such as Jules et Jim and The 400 Blows. Truffaut, often referred to as the father of the French New Wave, was at the forefront of the revolutionary movement, taking Alfred Hitchcock’s film grammar and reworking it in a wholly new way.

The French auteur’s filmography extends beyond his most famous works, giving us many unappreciated films to discover, and A Gorgeous Girl Like Me is no exception.

Truffaut’s screwball comedy is an underappreciated film with a wide concoction of genre ingredients. It offers so much more than its reputation (or lack thereof) suggests, with a beautifully zany score from famed composer Georges Delerue, and stunning performances from Nouvelle Vague regulars Bernadette Lafont and André Dussollier.

The film begins as an unrequited love story between two individuals but gradually evolves into something more unpredictable. A young sociology student preparing his dissertation on criminal women, Stanislas Prévine, meets Camille Bliss, an alleged murderer, and prisoner who seems too attractive to resist. As we learn the history of Lafont’s beguiling character, we also learn how she came to be in the unfortunate position she’s in. Stanislas is challenged to keep things professional, so Truffaut’s style comes to the fore, making for a film that is full of sardonic humor and true to the traditional French filmmaking style.

The overlooked comedy Zazie Dans le Métro by Louis Malle is equally impulsive and hilarious as A Gorgeous Girl Like Me. He is often considered one of the greatest French directors alongside Truffaut, with films like My Dinner with Andre and Elevator to the Gallows standing out as his better-known works. The films, however, differ from Zazie Dans le Métro in that they adhere to more cinematic conventions, which makes them more appealing to mainstream audiences.

It is difficult to describe this film. In 1960, at the height of the French New Wave, Malle’s anarchic vision makes the most experimental films of the time look tame. An endless circulation of editing tricks and visual gags set it apart from the rest. An adventurous ten-year-old goes to Paris for a weekend with her raffish uncle. A carnival of uproarious slapstick and innovative cinematic technique, on the other hand, is the result.

This is, of course, a film that isn’t for everyone, but when judged by its own merits, it certainly deserves more attention. Apart from Richard Ayoade citing it as an inspiration for his well-crafted coming-of-age movie Submarine, Zazie has somewhat slipped under the radar, which is regrettable considering how much fun it is. If you’re the type of filmgoer who’s always on the lookout for something unique, or if you prefer a risky adventure over a standard story, Malle’s chaotic masterpiece is for you.

To compile a French cinema list and omit Agnès Varda is virtually an abomination, so what could be a better example of her most underappreciated achievement than La Pointe Courte? Its panoramic photography complements the heartbreaking performances in this captivating black and white marriage story. Varda’s eye wanders between two distinct styles, one a documentary perspective on the cultural quirks of life in Sète, and another that tells a more straightforward story.

La Pointe Courte does not get the credit it deserves, especially when Varda is credited as one of the few women who helped bring the French New Wave to life. By 1955, this film came to the screen well before Godard and Truffaut had even started their careers, proving that the beginnings of the esteemed movement were as feminine as they were masculine.

The most impressive thing about La Pointe Courte is that it’s a debut. Despite having very little film experience prior to filming, Varda created the beginning of an entire cinematic revolution with a cast and crew that numbered barely a dozen people. In reality, this film predates many corners of European cinema, from the Swedish shore-gazing of Ingmar Bergman’s Through a Glass Darkly to Alain Resnais’ gloomy, doomed Hiroshima Mon Amour. This debut deserves more attention than any other.

With his unforgivably forgotten 1974 debut, little-known director Bernard Queysanne demonstrates a profound apathy for the world through surrealistic thrills and impending doom, merging in some of the most relentlessly aggressive fatalism of any art form. Like Travis Bickle’s hateful tirades from Taxi Driver, Queysanne’s magnum opus comes at an unstoppable pace, unlike Scorsese’s meditative pace.

Queysanne follows the life of only one character, a twenty-five-year-old university student who finds himself gradually abandoning his responsibilities. Few films present sadness so effectively, with lead actor Jacques Spiesser’s facial expressions doing most of the work, with no words spoken by him during the entire film. Through the stark black and white images, a woman speaks a poetically inclined, Godardian voiceover from his perspective, a sort of phonetic instrumental for the man’s life, and all of its hopeless mundanity.

The Man Who Sleeps might be the most overlooked film on this list. With swooping, majestic camera movements and the most confounding visual trickery, the direction here evokes boundary-breaking montage pieces such as Dziga Vertov’s Man with a Movie Camera and Chris Marker’s Sans Soleil. Typically, film essays aren’t this bleak, so prepare yourself accordingly. It is loneliness at its most unflinchingly portrayed, a masterpiece of penetrating cynicism, and it deserves to be championed as such.

As another gut-punch of a French adaptation, Claude Berri’s Jean de Florette was a critical darling on release, but over the years it’s fallen off the radar. The picture takes place in the rolling hills of Provence and tells the story of Yves Montand’s aging farmer César and Daniel Auteuil’s Ugolin, who together cast their envious eyes over the springs on a neighbor’s property.

A moral tale of scheming and greed unfolds a tale that has been told many times, but never like this. In the case of this particular film, it has a deeper meaning when screened simultaneously with its sequel Manon des Sources, the two pictures forming a counterbalanced two-parter much like Francis Ford Coppola’s first two Godfather films. The ending of Manon des Sources offers one of cinema’s all-time greatest twists, a moment of revelation that would take even the thickest-skinned viewer by surprise, making the near-four-hour journey beyond worthwhile.

As fate would have it, both of these films have been sadly forgotten, and Berri’s sympathetically told fable deserves a second chance. With its capitalistic hunger and photographic grandeur, this film is in every possible way an overlooked masterpiece tying the heartstrings in every conceivable way. The film examines the natural beauty of our planet and how that is always contrasting with its inherent cruelty. Fate isn’t always fair, and sometimes the good and the pitiful fall short while the wicked and greedy prosper. Such is the incongruous facts of life.