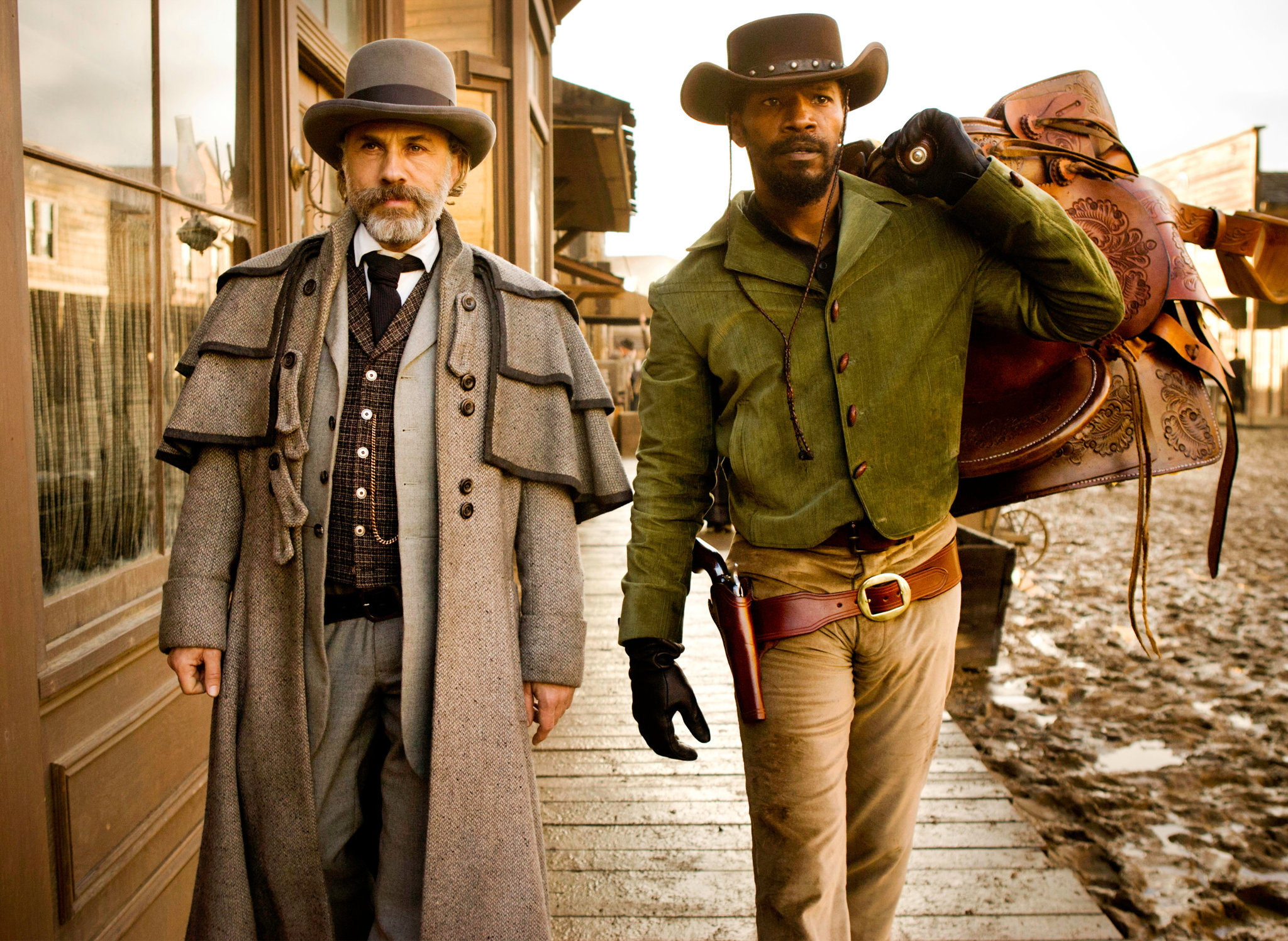 Once upon a time, the Western served the capacity that as of now lives inside the domain of Science Fiction: It was a stage to utilize a metaphorical way to approach thoughts and ideas that probably won’t fit well inside the extent of a conventional movie. It has been over a long time since the Western was a famous sport, be that as it may, when one is well made, it can in any case arrest the attention and transport the viewer to another place and time.

The Revenant is easily one of the best-looking western movies that came out in the last decade and are a thing of sheer beauty. The backdrop of the more is luxurious in the atmosphere and the lighting throughout the movie is stunningly natural. Above all the cinematography holds the viewer down as it’s both intimate and immersive.

The story follows Di Caprio’s character Glass, a legendary frontiersman who is very badly injured after a bear attack and is abandoned by his crew due to the fear of him being a liability. They also kill his son who refuses to leave him. The rest of the story is about him using his skills to survive the ice-cold wild alone and take revenge on his companion who betrayed him.

The whole cast shows great commitment and Leonardo Di Caprio bagged his first Oscar for his absolutely stellar performance which was one of the best performances of his career, a performance of emotional intensity and honesty that is most agonizingly poignant.

Clint Eastwood’s “Unforgiven” is perhaps what you could call the epitome of Modern Western movies. It packs all the bells and whistles of a good western but never indulges in the plot clichés or moral certitudes that are often inherent in the genre.

The movie is a melancholic meditation on the West or in other words it is about what happens after every other western movie. The outcomes losses, trauma, and the loss of balance that remains after the big fight.

The backdrop of the movie is 1881 and Eastwood portrays William Munny, a retired outlaw of the west who is forced to return to the trade after years of living a peaceful life as a farmer.

Primarily recognized for its anti-violence expression, “unforgiven” went on to become the third western to win the Academy Awards in the best picture category.

Tarantino’s “Django Unchained ” is a stylish and deliciously violent modern western movie that is not afraid to go far in some places. The film was criticized to be racist, violent, and crude but you have to keep in mind that it’s just a movie and one that is set in the backdrop of American history which was never a bed of roses. After all, you have to keep in mind that you’re walking into a Tarantino film, don’t expect it to be filled with teddy bears and unicorns.

The film is set at a timeline approximately two years before the civil war where Django is played by Jamie Foxx, a slave who finds himself accompanying an unconventional bounty hunter named Dr. King Schultz played by Christoph Waltz set on a mission to capture the vicious Brittle brothers. After successfully completing the mission, Schultz frees Django and they start to hunt the South’s most-wanted criminals together.

The rest of the movie deals with how they end up at the plantation of the infamous Calvin Candie played by Leonardo Di Caprio, where Django finds his long-lost wife (Kerry Washington) to be still a slave.

In a nutshell, Django Unchained is a ruthless and romantic epic that is also filled with unbridled entertainment that challenges audiences, rather than coddling them.

“3:10 to Yuma” is a film that plays with the viewer’s head, it twists morality and levitates the idea of the outlaw as a folk hero of some sort. The movie is modern in its perspective and dares to explore themes and ideas that are not exactly conventional.

The movie sports a respectable cast, with stars like Christian Bale and Russell Crowe playing opposite and talents like Peter Fonda, Ben Foster, and Gretchen Mol in supporting roles.

The look and feel of it are the Old West as we know it with Horses, Stagecoaches, Gunfights, shabby out of nowhere towns, and bad guys who are scarier when they smile.

The movie follows Dan Evans, a small-time rancher who decides to escort the outlaw Ben Wade to the court on the 3:10 train to Yuma for a good sum of money to regain his lost honor and retrieve his barn. Things go sideways when their path is fraught with trouble, including bloodthirsty goons and Ben’s gang in pursuit with a single goal of freeing Ben and finishing off all those responsible for his capture.

Tommy Lee Jones’s “The Homesman” is a different western with dark and gritty undertones exploring the subject of mental illness in a much less enlightened time. It is an adaptation of a 1980’s novel. Jones directs and acts as the prime character who is an old-timer who agrees to help transport three mentally ill women about 500 miles away to a sanctuary where they can be cared for.

The movie has a few dark twists and turns here and there, but the characters and the good performances will keep you engaged and watching with at least a single pleasing moment purposefully designed to lift the viewer’s spirits.

This is not a movie that you would say that you enjoyed watching but it is an experience on its own and kudos to Jones for bringing something different from the normal to the genre.

The proposition is an Australian take on modern western movies and it delivers it exceptionally well. The movie which could have been a cliché shallow, manly extravaganza proves to be a spellbinding experience due to its deep roots in human values and interactions. John Hillcoat regularly pauses and lingers to capture the stories and different innate reflections of numerous characters who converse with what we could describe as almost poetic license on words. The sudden burst of violence’s and the inevitability synced with profound monologues enhanced the quality of the movie.

The plot is set in 1880’s Australia, where a lawman offers and outcast Charlie Burns a deadly bargain. In order to save his younger brother from getting sacked, Charlie must hunt down and kill his older brother who is wanted for rape and murder. As he sets out into the most inhospitable regions of the land to hunt down his brother Charlie faces a terrible moral dilemma that can only end in bloodshed.

The Treasure Of The Sierra Madre

“The Treasure of The Sierra Madre ” is one of those movies that very casually seeded its way into pop culture with sheer quality. It is not a movie that gets discussed very often but like greed itself, it endured, finding its way into the hearts of its audience. Humphrey Bogart who was a star at the time played the villain character in the movie described his character as “the worst shit you ever saw”, and possibly gave the best performance of his career.

The film deals with the story of three men, desperate for money and knee-deep in trouble in a foreign country who have prospects for gold. The metal finds its way into their heads and threatens to poison their souls. How greed changes a man into an entirely different person filled with selfishness, jealousy and rage are painted beautifully through the characters. In a nutshell, it is a personal story, told with humor and adventure, which warns that everyone is susceptible.

The Assassination of Jesse James by the Coward Robert Ford (2007)

“The Assassination of Jesse James by the Coward Robert Ford” is a movie that could be almost described as a poetic western. It paints a dreamlike picture of the post-civil war American outlaw west. The movie is a visual treat with a strong and bold script to back it up. The explorations into the period’s strange relationship between violence, celebrity, and self-identity, coupled with the visually stunning work of legendary cinematographer Roger Deakins make this movie worth its time.

The movie can be described as a thinking man’s Western and this might be a turn-off for the fans of 2 hour-long continuous gunfights and violence but we should be wishing for more westerns like this. The approach and execution are almost cinematic poetry.

John Ford’s milestone Western revolves around a random gathering of travelers onboard the Overland stagecoach headed for Lordsburg, New Mexico, during the 1880s. A heavy drinker philosophizer (Thomas Mitchell), a woman with a history of ill repute (Claire Trevor), and a timid alcohol sales rep (Donald Meek) are among the diverse team of voyagers who should fight with an escaped outlaw, The Ringo Kid (John Wayne), and the closing in danger of an Apache assault as they advance across the Wild West.

As is common in westerns of that period, Native Americans are the bad guys, in this situation Geronimo and his crowd. Will the stagecoach escape without being assaulted by these blood-thirsty scalp thieves? That is Stagecoach

Kevin Coster’s “Dances With Wolves” is a movie with vision and ambition that is rare in movies we see today. It is not a movie that merely follows a success formula but a carefully and thoughtfully narrated story. It daringly stood tall at a time when the western was said to be dead. It demands the viewer’s attention and imagination and sympathy as it takes its own time to unfold the story, three hours to be precise. This is a movie so well made that it sounds impossible to believe that it was the directorial debut of the director Kevin Coster.

Set during the civil war, the chronicles the exploits of Lieutenant John Dunbar whose loyalties are tested after being accepted and embraced by a native American tribe. The movie is considered to be a pinnacle achievement and a landmark for its revitalization of the western genre.

It also won the academy awards for best picture, when the last western to win the same was in 1931.