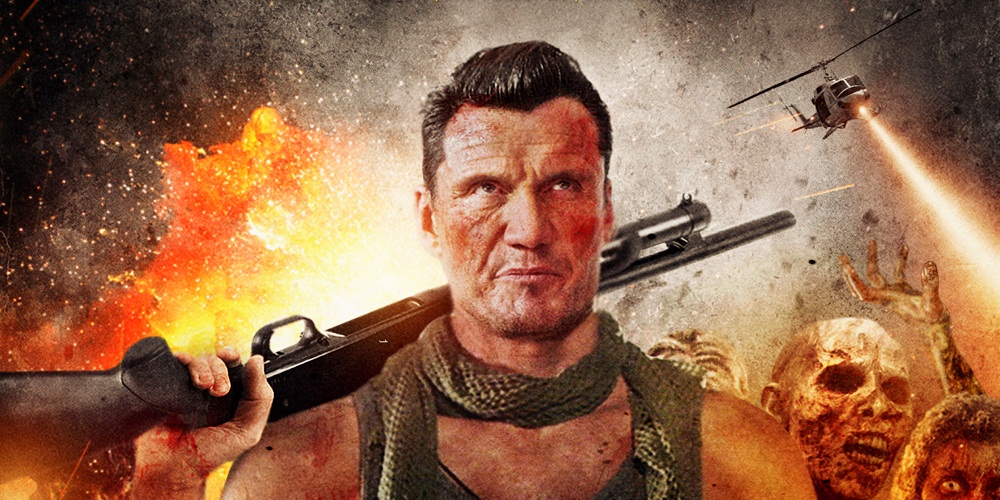 Dead Trigger is the first live-action videogame film to be adapted from an app, and it has a distinct place in history. Apart from that, the zombie film starring Dolph Lundgren is largely remembered for its rocky production: Two days before filming, original writer/director Mike Cuff was sacked, leaving Scott Windhauser to rework the script and direct the film. Its really awful digital blood FX weren’t caused by problems at the top (use some squibs, folks! ), but its uninteresting plot and single-take delivery style may have.

Most younger readers may be unaware that the Rampage video games were arcade games with multiple sequels across a variety of platforms. It all started in 1986 and lasted until the mid-2000s. Instead of being the hero who defeats the monster, players were giant monsters stomping everything and everyone. A King-Kong look-alike named George, a Godzilla-like giant lizard named Lizzie, or the wolf Ralph were the three options for a three-player experience. The point is to go berserk and annihilate everything.

Since its announcement in the mid-2000s, Duncan Jones’s Warcraft has taken the greater part of a decade to complete. While some may believe its looks to be the only thing to enjoy, a large number of fans appreciate the effort made to portray the tale of the world of Warcraft’s foundations. As proof, the film made more than $400 million worldwide. It’s a two-hour prologue that some seasoned gamers may find too long to wait for merely the introduction. Characters are both believable and consistent. Warcraft is a gaming movie adaptation that has a lot of potentials, even if we have to wait another decade for the next installment in the franchise.

The revamped Tomb Raider franchise places Lara Croft in the skin of Alicia Vikander and sends her to an uncharted Pacific island in pursuit of an entombed legendary Japanese empress’ wealth. For anyone who enjoyed the 2013 relaunched game series, this will most likely be an entertaining film to see. Both the plot and character development are on track, and while the two-hour runtime does not allow for much expansion, it does plenty.

It’s one thing to use the source material’s plot, characters, and language to create an excellent adaptation. However, employing merely the atmosphere and still succeeding is in a class of its own. While Christophe Gans’ Silent Hill is a rough version of Konami’s survival horror, it cultivates a sensation from the original that infiltrates the viewer’s head just as much as the game’s location. The plot is as enlightening as the mist in Silent Hill 2 – Sharon, portrayed by Jodelle Ferland, goes missing after being bewitched to travel to Silent Hill. Radha Mitchell plays her mother Rose, who travels to locate her. And, like with every Silent Hill or horror title, things happen.

A recent film that has managed to stay loyal to the source? Not at all! Let’s be honest and say it straight away: Mortal Kombat 2021 isn’t the greatest it could be, but it’s very close. The first film, released in 1995, and the subsequent failure of a sequel, as well as the succeeding films, were all stepping stones building up to this newest episode in the series. Fans got exactly what they wanted: deaths in fashion and all combatants depicted as real versions of themselves rather than as battling figures on a field. Of course, the Mortal Kombat franchise has been marked by plenty of blood and violence, and the film does not shy away from this.

Imagine a real-life Pikachu who looks, moves, and speaks like Ryan Reynolds’ voice. Is it too idealistic? You can guarantee that Deadpool’s actor and the CG crew made it feel authentic in both the trailer and the film. Even before the film was released, when photographs of the yellow furball leaked on the internet, it was the cutest thing we’d seen in a long time. When we hear the word Pokémon, we all assume a Poké-battle, telling our roster of six to pummelled our opponent trainer until they are out of Pokémon or throwing a curveball till we hit and catch the wild creature standing in front of us.

The latest video game adaptation to hit the big screen, fresh out of the production room and published just in June, is a comic horror film brimming with fun and games. No, I’m serious. It follows a group of individuals trapped in a cabin during snowfall as they try to figure out which among them is a werewolf. The film’s director, Josh Ruben, attempts to preserve a lot of the original’s ridiculousness in determining who is a flesh-eating monster and who is just trying to survive.

Assassin’s Creed seemed like the first time video game movies were put in the forefront. Whereas some were considered as curiosities or only for a certain audience, Assassin’s Creed tried to lay all of that to rest with a gripping take on the unending conflict between the Creed and the Templar Order. Assassin’s Creed, starring Michael Fassbender, Marion Cotillard, and Michael K. Williams, is a film with a star-studded cast. It lends the film credibility, and it is accompanied by an impressive-looking Animus adventure in 15th-century Spain and a parkour-heavy style that pays respect to the series without going overboard on fan service, as other films do.

The team behind the Resident Evil franchise is returning with another adaption. Instead of running and killing zombies, Paul W.S. Anderson and Milla Jovovich take on the task of hunting enormous monsters. It is one of the critically acclaimed video game films that work to improve the industry rather than destroy it. While the narrative is relatively lackluster, the CG monsters are wonderfully done, and the action sequences, or at least most of them, are a pleasure. With a slew of flunks under his belt, Anderson has spiced up his style, while Jovovich displays some acrobatic moves once more. The appearance of martial artist Tony Jaa is one of the small things that add to the pleasure.