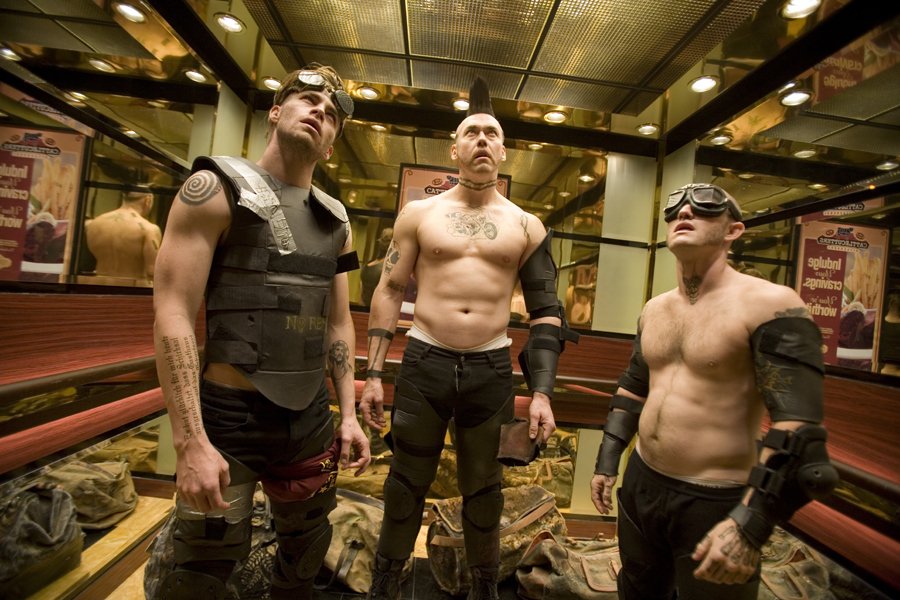 10 Amazing Action Movies That Nobody Knows

Hannah (Saoirse Ronan) is a lethal assassin trained in the Finnish wilderness for years. Her weaknesses are few and far between. She uses all of that training when she faces the mysterious Marissa Wiegler (Cate Blanchett) and her legion of agents who would stop her from finishing the mission. However, as Hanna becomes aware of her own existence and her past, the tough and stoic facade begins to crumble. Hanna is a beautifully shot, well-paced action thriller directed by Joe Wright (Pride and Prejudice, Atonement, Darkest Hour). It has a brutal action sequence and an emotional story. If you are looking for a movie that combines mystery, drama, and hard-hitting action, then look no further…

Is there anything worse than performing at a Nazi skinhead bar in rural Oregon? That’s what The Ain’t Rights find out. In addition to piling off a gang of neo-Nazis to cover the Dead Kennedys ‘classic, “Nazi Punks, Fuck Off “, they are soon trapped in a bar after witnessing a murder backstage. The outnumbered and outmanned band must fight off wave after wave of Nazis led by Darcy Banker (Patrick Stewart) to escape. One of the most violent and harrowing movies to come out in 2016 was Jeremy Saulnier’s Green Room. There are other movies with more gore, but the realism of this film’s approach to violence is what sticks with you. After watching one scene that involves a door, a machete, and Anton Yelchin, you won’t look at your arm the same.

The wealthy and influential sons of the country’s leaders go to Regis High School when they have been booted from every other preparatory academy.  It’s up to a group of rejects led by Sean Astin, Wil Wheaton, and others to prevent disaster when a Colombian drug cartel takes over the sprawling campus and holds the students hostage. Toy Soldiers is best described as a fun yet shockingly violent spectacle that combines equal parts Die Hard, Home Alone, and Red Dawn. With Louis Gossett Jr. as the school’s dean, you may find yourself having an enjoyable time.

The Japanese official from 19th Century Japan grows tired of Lord Naritsugu Matsudaira (Goro Inagaki) and hires a gang of assassins led by Shinzaemon Shimada (Koji Yakusho) to eliminate him. Together, Japan’s 13 most lethal samurai devise a plan to capture the mad lord and his most loyal followers. The 2011 remake of 13 Assassins by Takashi Miike is a slow-burn that might not appeal to those who like their movies to jump right into the action. When you get to know all the characters and become invested in their backstories and motivations, you are treated to some of the best samurai actions of the modern era. There is a lot of violence, blood, and once the movie starts, it doesn’t stop.

It’s up to Gabriel “Gabe” Walker (Sylvester Stallone) to stop the thieves who plan to steal the United States treasure of $100 million no matter what the cost. A former mountain climber faces this difficult task because he is still traumatized by the fact that he could not save his friend’s girlfriend before she died from a fall in the Colorado Rockies. Despite earning more at the box office, Cliffhanger – directed by Renny Harlin – was often overshadowed by Sylvester Stallone’s other 1993 blockbuster, Demolition Man. Still waiting for that Cliffhanger remake, though.

During the transport of murder suspect Koji Sato (Yusaka Matsuda) back to Japan for a murder trial, NYPD police officers Nick Conklin (Michael Douglas) and Charlie Vincent (Andy Garcia) have to deal with the unexpected outcomes. In a daring escape, his fellow Yakuza start a journey through the criminal underworld of the Japanese metropolis to find him. The journey, however, proves to be nothing short of difficult. The action thriller Black Rain, directed by Ridley Scott, is about two New York cops who travel to a foreign land with a different understanding of justice. Once the villains’ motivations and the inspiration for the movie title are revealed, the movie takes an even darker turn. In some exhilarating motorcycle chase scenes, Michael Douglas’ longtime stunt double also appears in the thriller.

After his daughter, Emma (Bojana Novakovic), is murdered in cold blood on his doorstep, homicide detective Thomas Craven (Mel Gibson) embarks on a dark and unknown journey. As the story unfolds we see a grieving father and a man with nothing to lose trying to uncover the truth of the heinous crime, even if the loss of his child is just the beginning. Gibson’s first lead role since Signs in 2002, Martin Campbell’s 2010 conspiracy action thriller Edge of Darkness is very much in the style of the movies he built his career on in the 1980s and 1990s. This film is violent, tense, and has more twists and turns than anything else on this list.

After Nick Parker (Rutger Hauer) is blinded by a landmine explosion during the Vietnam war, he is taken in by a tribe and trained to strengthen his remaining senses while becoming an absolute badass with swords. As he returns to the United States hoping to reconnect with an old war buddy, Nick becomes involved in a dangerous situation involving a mob boss, trained assassins, and the rescue of a young boy. Blind Fury is one of those movies you catch about halfway through the night on some random channel and just keep watching because it’s so bonkers. The 1990 action film directed by Phillip Noyce has tons of action sequences and one-liners by Rutger Hauer.

When predatory aliens decide a housing project in South London would be the perfect place to start taking over Earth (on Guy Fawkes night, no less), they meet up with a local street gang led by Moses (John Boyega). With the guidance of their crook-turned-hero, the gang sets out to save the block, the city, and the world from this extraterrestrial threat.

Featuring a unique blend of horror, comedy, action, and sci-fi adventure, Attack the Block was one of 2011’s best action movies. It was directed by Joe Cornish, who was next to write and direct Ant-Man and The Kid Who Would Be King.